Above we saw how Coase applied his property rights theory to ‘The Problem of Social Cost’ or externalities, to offer an alternative logic to policy makers and economists who were locked in an argument between two ends of what can be described as an ideological or policy spectrum with ‘command-and-control’ one end and marketbased approaches such as taxation on the other.

org/wp-content/uploads/2017/12/A-Spectrum-of-Policy-Instruments.png” alt=”A Spectrum of Policy Instruments” width=”522″ height=”282″ />In the Figure above, command-and-control policy instruments are characterized as having the state or government in control of the key decisions relating to production of goods and services and pollution abatement. Alternatively, at the market-based end of the spectrum, these decisions are taken by individuals and firms. For these reasons, market-based mechanisms are traditionally supported by the champions of free-markets or libertarians, whereas command-and-control approaches are favoured by those who see a large state or more socialist government, as being the best form of social and economic organisation.It is important to keep these institutional and political considerations in mind when evaluating policy instruments as, in practise, different policies will be more or less effective depending on the context in which they are applied. For example, as pointed out in Stern regulation may be more effective in countries with a culture of using command-and-control methods, or where there are political or administrative problems with raising taxes or with tax collection (Stern, 2007). Policies that work in one sector such as stationary energy, maybe less appropriate for others, such as transportation or agriculture.In addition, any decision to implement a new policy instrument should be taken in the context of policies already in place that impact on the problem.

For example, it is more efficient to first scrap existing subsidies which encourage fossil fuel use than to implement a new tax or an emissions trading scheme and it is necessary to be mindful of the geopolitics of energy security regarding sovereign autonomy.Contingent on these broader geographical, cultural and political contextual considerations, policy instruments may vary in their environmental effectiveness, distributional impact, cost effectiveness in achieving emissions reductions and in their institutional feasibility. As a rule of thumb, these four considerations are useful starting point for evaluating policy.With these caveats in mind, let us now consider the advantages and disadvantages of the main policy instruments for CO2 emissions control, which are summarized in Table 5. 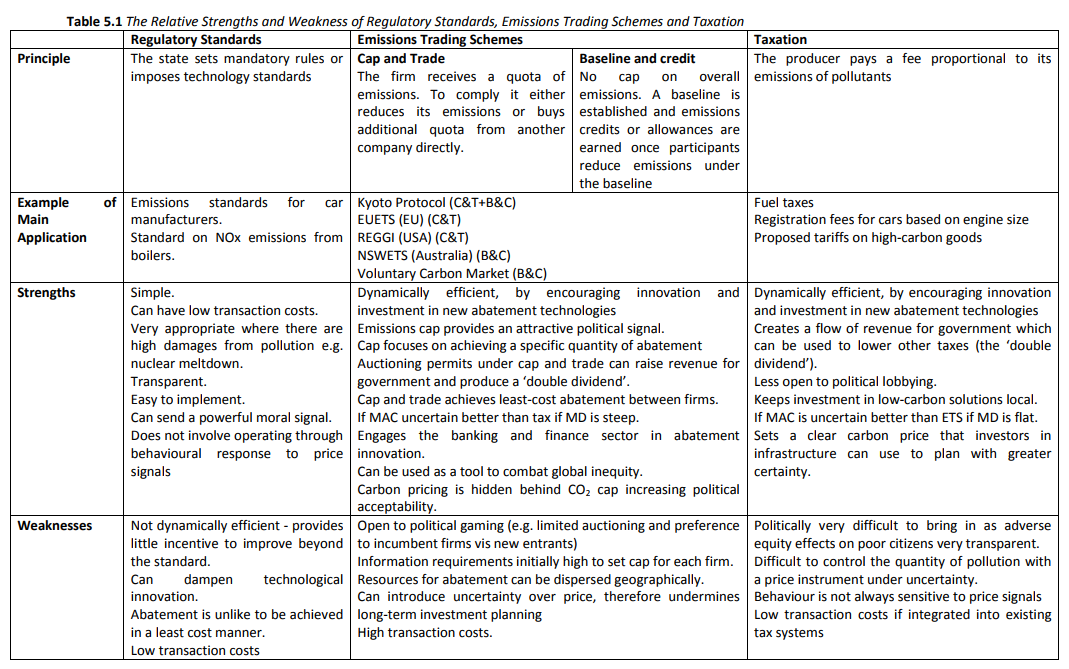 Within economics there is a vigorous debate around the question ‘to tax or to trade?’ (Hepburn, 2006) That is, should governments be aiming to impose a carbon price through taxes on fossil fuels such as oil and coal? or through setting emissions quotas on firms and countries and then allowing trading à la Coase? In each case the policy objective is to establish a carbon price sufficient to shift the economy away from greenhouse gas producing activity, but one operates through the price mechanism and the other through the quantity mechanism.William Nordhaus represents the canonical perspective of economic theory applying the insights from Martin Weitzman that under different types of uncertainty price instruments (taxes) should be preferred over quantity instruments (quotas and emissions trading) and visa versa (Weitzman, 1974 and Nordhaus, 2007). This follows a simple and powerful logic.Using a pure price instrument, such as taxation, while achieving certainty on what the price of carbon will be (in theory optimality at P*) the policy maker is unsure exactly what the final quantity of emissions will be.

The carbon price is set and the quantity of pollution emerges through the market. It may take several years and changes in taxes to achieve the optimal tax rate (P*) and the desired level of emissions at Q*. However, what it does guarantee is what the cost of pollution abatement will be – thus providing certainty to polluters to plan investment.Alternatively, by using a quantity instrument, the policy maker provides certainty around the level of pollution that will be emitted (Q*) and allows the price of carbon to emerge in the market. However, this can mean that the polluting industry faces greater uncertainty around the costs of abatement than under the tax.Whether taxes or trading is to be preferred in this simple model depends on the policy priority of the regulator and the relative costs of the damage from pollution and cost of abatement in the event of uncertainty in the position of the marginal damage curve (See Figure 5.

4).If the marginal damage costs are high (steeply sloping) – that is if not hitting the emissions target results in catastrophic events (such as melting of the Greenland ice sheet, or release of methane from the permafrost, leading to a positive feedback cycle which rapidly accelerates global warming) then clearly ensuring that Q* is achieved is highly desirable – the policy maker should use a quantity instrument.If on the other hand, if the damage costs are low (ie a flat curve) and the marginal abatement costs are high – for example, it may be extremely expensive to decommission long-lived, high-carbon energy infrastructure and expensive to scale up renewable energy – then it would be preferable to set the carbon price to allow people and industry flexibility around how much abatement needs to be achieved.Under these circumstances, the choice of instrument depends on the view that the policy maker takes on the costs of abatement versus the risk of a catastrophic event occurring.

If they are very worried about the risk of a climate catastrophe (steep MDC curve) they should use a quota and emissions trading, if they are more worried about the costs of mitigation – such as higher fuel prices, inflationary pressures, higher long-run interest rates, slower economic growth, higher unemployment and so on, then the use of taxes would, in theory, be preferred.

This highlights one reason why the somewhat esoteric debate around discount rates is so important. As most of the costs from dangerous climate change occur 20 years and more into the future, but the cost of mitigation are incurred in the short term – how we account for these far off costs in today’s terms is critical to our view on the slope of the marginal damage curve.

Within economics, this is done through discounting.Discount rates are implicit in dozens of decisions we make every day, though most people do not usually think about it in these terms. The reason why most people discount is due to the simple reason that humans are impatient by nature and generally speaking we value things more, the sooner we can get them. This form of discounting is known as pure time discounting.An additional reason why we discount the future is because we assume we will be better off in the future combined with the general belief that an extra pound is generally worth less the better off you are.On a practical level, this is reflected by interest rates. One pound invested today would accumulate to £(1 + r) in year 2 if the interest rate was r per cent. Where r is typically expressed as a decimal point, e.

10 and so on.Turning this logic around, we can ask, ‘How much is £1 in year 2 worth to us today in year 1?’ The answer is that it is worth £1/(1 + r) for the reason that this is the amount you would have to invest in year 1 to obtain £1 in year two.For example, using a relatively high discount rate of say six per cent or more (approximately what is used for long-term commercial decision-making) would mean that the policy maker perceives the marginal damage function today as quite flat as the costs of climate change occurring in the future would be worth a lot less in today’s terms, therefore according to the logic above, taxes should be preferred.

Using a low or declining discount rate over time (such as used in the Stern Review) of say four per cent or less would mean the policy maker would weight the long-term costs of climate change more relative to the short-term costs of mitigation, and (according to theory) should lean towards a cap and trade scheme.It is an implicit argument of the Stern Review that it is appropriate for governments to use lower discount rates than in the private sector as they must make decisions both in the public interest and because they govern for future generations just as much as they do for current citizens. This is an argument based on an ethics or philosophy of Rawlsian equivalence – that is political leaders should make decisions on the basis that when they die they would come back re-incarnated as a random member of any section of society. In contrast to this view, the private sector is generally assumed to be focused on the interests of current shareholders and must weigh investments against opportunity cost of capital (the interest rate).The Stern Review attracted considerable criticism for adopting a low discount rate and somewhat less criticism for favouring emissions trading over taxation.

At the centre of the controversy was that the Review only discounted due to the assumption that future generations will be better off and the chance (about 1 in a thousand each year) that we will be extinct as a society due to meteor strike or some other catastrophe. On the matter of pure time preference (see Box 5.2) the Review assumed a discount rate of zero. That is that the ‘government’ should hold no bias between the welfare of current and future citizens on the basis that society as a whole is impatient. It is for this reason that Stern is frequently characterized as taking a stronger ethical stance than other economic studies such as those by Nordhaus, who favours higher discount rates and also taxation over emissions trading.

Indeed, if the policy maker takes a very low discount rate (assumes marginal damage from CO2 is very high) and is concerned about whether the price signal will be able to change behaviour in time then it may become efficient to impose regulatory standards or bans on high-carbon technologies. For example, in the UK the idea of a ban on new coal power plants is being debated and world-wide, fuel efficiency standards are already in place for car manufacturers.Such policies have the advantage of not working at all through the slow process of changing behaviour through the price system. However, if not carefully designed such standards could result in high electricity prices or disruptions to power if new generating capacity was not able to be brought on at a price consumers were willing to pay for. A further disadvantage of such strong regulatory action is that it could act as a disincentive on investment in energy supply leading to shortages or high prices for consumers.