When species were systematically removed from food webs in our simulations, potential secondary extinctions varied both among webs and among types of removal sequences (Figure 2.2). All 12 food webs were most robust (in terms of the number of primary removals required for complete food-web collapse with the inclusion of rewiring) when species were preferentially removed at high trophic level. Six of the food webs were least robust to random species removal, five food webs were least robust to preferentially removing the least connected species, and one food web had the same robustness value for both random and least connected removal.

For each of the three removal criteria simulated for each food web, the shape of the secondary extinctions curve appeared qualitatively similar for simulations including and excluding rewiring. However, the magnitude of robustness differs depending on whether rewiring is included or not: for a given removal criterion, robustness was consistently higher in simulations that allow predator-prey rewiring. Even with conservative rewiring, we see absolute increases in robustness of up to 0.1 (Little Rock Lake and St. Martin Island). This implies that simulations with rewiring require 10% more primary species removals to cause complete food web collapse, equivalent to 9 and 4 species for Little Rock Lake and St. Martin Island, respectively. 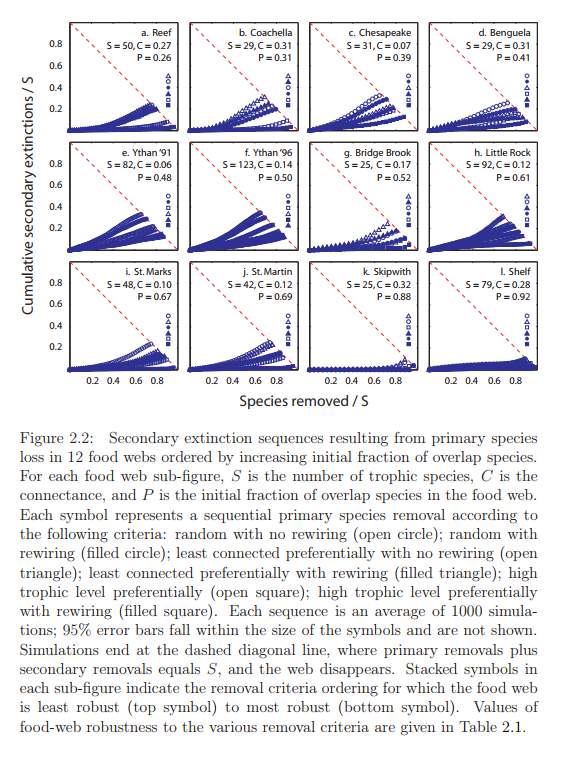 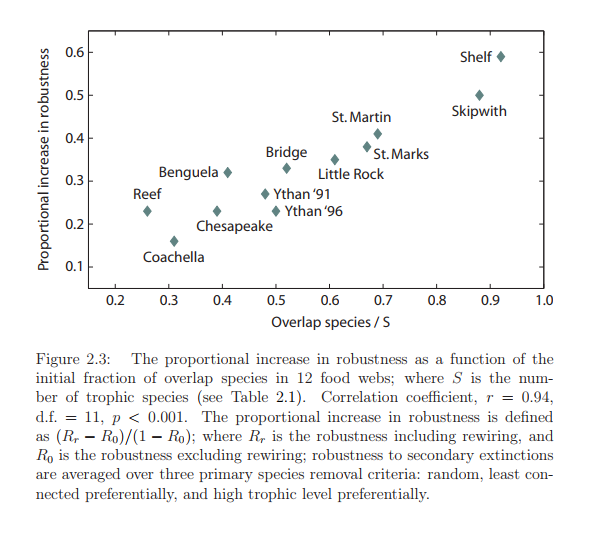 18, d.f. = 11, n.s.). However, we found a significant, strong positive correlation between the proportional increase in robustness and the initial fraction of overlap species in the food web (r = 0.94, d.

s. Some highly-connected species, such as small pelagic fish and invertebrates, are the particular target of human exploitation, and so results for removing the most connected species preferentially are also of interest (Dunne et al. 2004). Including this scenario in the criteria-averaged proportional increase in robustness does not alter our results substantially: the correlation with the initial fraction of overlap species is r = 0.

In Figure 2.2, the cumulative secondary extinction plots for the 12 food webs are ordered by increasing initial fraction of overlap species, P. There is no significant correlation between P and S (r = 0.13, d.f. = 11, n.s.

5, respectively), despite the food webs having similar ‘global’ structural characteristics. This suggests that the explicit topology of a food web is important to determining its structural dynamics and robustness.

Investigations of the structural robustness of empirical food webs increasingly suggest that topological details greatly influence their simulated vulnerability to secondary extinctions. Initial studies found that food webs are more robust to random primary removal of species than to selective removal of species with the most trophic links (Dunne et al. 2002). Food webs were consistently more robust to our three ecologically plausible removal criteria compared to removal of the most connected species preferentially (both ordered and probabilistic, data not shown), in agreement with a previous study (Srinivasan et al.

2007).Attempts to find maximally destructive removal sequences suggest that the position of a species in the food web, rather than its number of connections per se, is the main determinant of its impact on extinction cascades (Allesina & Pascual 2009). Various structural indices have been considered in attempts to identify functionally important species in ecological networks (Jord`an et al.

2008). One such measure, the trophic overlap, uses the overlap of weighted trophic interaction data to quantify the uniqueness of species’ interaction patterns (Jord`an et al. 2009). How these structural indices relate to properties of the overlap graph and overlap species merits further investigation.As acknowledged in earlier topological studies (Dunne et al. 2002), failure to include a mechanism for predator-prey rewiring in simulations may result in overestimates of the number of secondary extinctions following the removal of individual species.

We show that including rewiring in the topological approach consistently increases the robustness of food webs to primary species removal. This finding is in many respects unsurprising: any model that reduces the loss of trophic links would be expected to increase the persistence of the food web. However, how this additional robustness, generated by the dynamic adaptation of trophic interactions, varies systematically with different properties of the food web is not obvious a priori.The proportional increase in robustness was uncorrelated with the traditional food web metrics, species richness (S) and connectance (C), and was instead most highly correlated with the initial fraction of overlap species (P). This result was robust to alternative definitions of trophic level and to non-random methods for selecting a new predator from the set of available potential predators (data not shown). Within our predator-prey rewiring model, overlap species are systematically defined: they are species in a food web’s rewiring graph that have out-degree > 0 (see Figure 2.1). This definition means that overlap species indicate the presence of potential predators in the food web.

There is no reason to suggest that overlap species should be such a good indicator of the proportional increase in robustness when advancing from static to dynamic food-web topologies.Knowledge of the initial fraction of overlap species in a food web is insufficient for quantifying the precise number of 41 potential predators, nor the (maximum) number of trophic links that may be retained due to rewiring; P also gives no indication of where those links are located within the topological and trophic structure of the food web, details especially pertinent given the cascading nature of secondary extinctions. Furthermore, we find that another property derived from the overlap graph—the connectance of the overlap graph—has no significant correlation with the proportional increase in robustness (r = 0.34, d.f. = 11, n.s.; data not shown).

Thus, the fraction of overlap species appears to encapsulate, in a very succinct way, the relevant structural features that ultimately influence the proportional increase in robustness of empirical food webs.So, how are we to understand overlap species? The introduction of structural dynamics to topological models of food web robustness highlights the role of compensatory mechanisms in reducing secondary species extinctions following environmental perturbations. Our identification of overlap species represents an intriguing avenue for exploring how those compensatory mechanisms are related to the properties of individual species and the composite roles they play within ecosystems. Understanding interaction patterns from a biological perspective often requires a combination of phylogenetic information and information on species’ ecological traits (Ives & Godfray 2006).

Increasingly detailed and comprehensive food-web data is becoming available (Jacob 2005).These data make it feasible to compare species characteristics (such as body-size, taxonomic identity, and geographical range) and community and ecosystem characteristics (such as biomass and abundance) between overlap and non-overlap species. Such additional information may also be incorporated into decisions regarding the plausibility of trophic rewirings. Phylogenetically related species tend to have similar biological characteristics (Freckleton et al. 2002), and a phylogenetic approach has been used to investigate constraints on trophic structure (Bersier & Kehrli 2008), patterns of consumer-resource association (Ives & Godfray 2006), and coextinctions in mutualistic networks (Rezende et al.

2007).A phylogenetic consideration of overlap species would provide additional information on the relationship between species’ characteristics and structural dynamics. Furthermore, aggregation into trophic species is likely to underestimate the number of “real” overlap species in a food web. These will be distributed non-randomly in the food web, since trophic species contain more real species at lower trophic levels (Williams & Martinez 2000). This will be an important consideration for the identification of overlap species in the field.In our predator-prey rewiring model, trophic adaptation (rewiring) results from changes in prey abundance brought about by species removal.

Three other factors can directly alter diet compositions and feeding rates: changes in “habitat factors” such as temperature, water clarity, and soil acidity; changes in predator feeding rates and search tactics; and changes in predator abundance and competition. In our current model, if a trophic rewiring is possible then it is established, but in reality competition among predators for a prey species may prevent some rewirings from being realised. This could be incorporated into the model by prescribing a probability for the rewiring. Greater competition between predators would imply a smaller probability of rewiring, and the overall effect would be a reduction in foodweb robustness relative to that observed in the current model.Extinctions resulting from the loss of prey species represent the most predictable subset of secondary losses. Our structural approach may be considered a baseline that corresponds to the best-case scenario in which the minimum impact to the food web is taken into account. Although the predatorprey rewiring model improves the evaluation of secondary extinctions, our framework still underestimates the potential for cascading extinctions due to strong non-trophic and indirect effects (Strauss 1991). In particular, the robustness of food webs to preferentially removing species at high trophic level may be altered significantly if the regulatory effects of top predators are taken into account.

Another important source of additional secondary extinctions will be related to the bioenergetic or population dynamics of species. Other forms of trophic adaptation have been shown to cause an increase in food web persistence and stability.A population dynamic model on static food-web topologies demonstrates that foraging adaptation may shift the complexity-stability relationship of food webs from negative to positive (Brose et al. 2003; Kondoh 2003, 2006; but see Garcia-Domingo & Salda˜na 2007). Despite much success on small, illustrative, food webs, the analysis of removal effects using nonlinear differential equations remains challenging for large ecological networks, requiring parameterisation of species interactions with values that are often empirically unavailable (but see Borrvall & Ebenman 2006; Brose et al. 2005). Nevertheless, there exists the prospect of combining such bioenergetic and population dynamic models with a dynamic structure of trophic interactions.In a model of paleocommunity response to species extinction, it was found that if consumers are permitted to compensate for the loss of trophic resources by increasing the intensities of their remaining biotic interactions, top-down secondary extinctions emerge (Roopnarine 2006).

Whether the effect of topological predator-prey rewiring, which may mitigate the increase in intensity described above, would reduce top-down secondary extinctions has not been considered. This is an example where the combination of population and structural dynamics would be necessary to assess fully the impact of species removal from a food web.We have considered the implications of structural dynamics on the robustness of empirical food webs. It would be instructive to apply the predatorprey rewiring model to synthetic food webs generated by, for example, the niche model. This would allow a comprehensive analysis of how structural dynamics affect robustness as food web size and connectance is varied.

Models that allow the contiguity of prey consumption to be varied (Williams & Martinez 2008) provide a way of investigating the relationship between feeding intervality and the ability of food webs to rewire. Such a study would also be relevant to the analogous issue of nestedness and robustness in mutualistic networks (Bascompte & Jordano 2007).This study uses binary food webs that indicate the presence of a trophic interaction but provide no information on the frequency of the interaction or the rate of biomass flow through the interaction. The increasing availability of quantitative, weighted, trophic interaction data presents an opportunity for improving the realism of food-web robustness studies. Compared to binary food webs, quantitative food webs more accurately describe the structure and strength of trophic interactions and hence better inform the sensitivity of species to environmental perturbations (Ings et al. 2009). Future models should incorporate weighted information when determining the rewiring of trophic interactions and when simulating the magnitude of species loss.

In conclusion, our study underlines the importance of compensatory mechanisms that may buffer ecosystems against perturbations, and highlights particular species that are expected to facilitate those mechanisms. The consideration of structural dynamics also enhances our understanding of the basic robustness provided by food-web topologies. Differences in what could be termed “structural plasticity” between empirical food webs, and the role of overlap species in conferring structural robustness, has potential implications for ecosystem conservation and management. Finally, the general method for implementing structural dynamics that we have presented is amenable to other approaches that seek to employ realistic food web structure and dynamics.Next Page – Active Reallocation of Food-Web Interactions under Environmental ChangePrevious Page – Structural Dynamics and Robustness of Food Webs