However, existing food web models do not take into account likely changes in trophic interactions (“rewiring”) following species loss. We investigated structural dynamics in 12 empirically documented food webs by simulating primary species loss using three realistic removal criteria, and measured robustness in terms of subsequent secondary extinctions. In our model, novel trophic interactions can be established between predators and food items not previously consumed following the loss of competing predator species.By considering the increase in robustness conferred through rewiring, we identify a new category of species—overlap species—which promote robustness as shown by comparing simulations incorporating structural dynamics to those with static topologies.

The fraction of overlap species in a food web is highly correlated with this increase in robustness; whereas species richness and connectance are uncorrelated with increased robustness. Our findings underline the importance of compensatory mechanisms that may buffer ecosystems against environmental change, and highlight the likely role of particular species that are expected to facilitate this buffering.

Human-induced changes to the global environment driven by climate change, pollution, and habitat destruction are expected to cause widespread extinctions of populations and species globally (e.g., Brook et al.

2003). The robustness of ecological communities to such changes has been the subject of numerous empirical and theoretical studies (e.g., Shin et al. 2004; Dobson et al.

A particular focus has been on food webs (networks representing biomass flow through ecosystems), and the relationship between their structure and robustness to species loss (Dunne et al. 2002, 2004; Dunne & Williams 2009). Enhanced ecological realism has been incorporated into food web analyses by employing plausible extinction sequences (Srinivasan et al. 2007) and by incorporating the effect of human-mediated disturbances (Coll et al. 2008). However, existing models remain inherently static in their description of food web response to species loss. This reflects available empirical data which mostly represent food webs either as a snapshot in time (Thompson & Townsend 2005) or aggregated over time (Martinez 1991).Recent work has sought to analyse the interplay of structure and dynamics in food webs (Pascual & Dunne 2006).

One approach has been the combination of food-web topologies with bioenergetic and population dynamic models that represent predator-prey interactions by a system of nonlinear differential equations. Such investigations have, for example, considered the effects of single species removal in reconstructed “fossil” food webs (Roopnarine et al. 2007) and synthetic topologies generated by the niche model (Berlow et al. 2009). Some studies have begun to incorporate adaptive foraging (Brose et al. 2003; Kondoh 2003, 2006; GarciaDomingo & Salda˜na 2007), by which consumer species maximize the energy gain per unit foraging effort by behavioural shifts in prey selection.

Foraging theory has also been used to predict species interactions and resulting food web structure (Petchey et al. 2008). The consequences of species loss have also been modelled in food webs where predators preferentially consume competitively dominant prey species and thus prevent the competitive exclusion of many other subordinate competitors (Brose et al. 2005). Nevertheless, in each of these approaches the underlying trophic structure remains essentially static through time.

A general framework for considering the structural dynamics of food webs would increase the realism of theoretical models in accordance with the observation that species are able to adjust their feeding behaviour in response to changing environments.The diet of a consumer is to a large extent constrained by its phylogenetic history, morphology, and body size (Cousins 1985; Ives & Godfray 2006; Bersier & Kehrli 2008). However, individuals of many species will respond to altered biotic and abiotic conditions by incorporating into their diets items not previously consumed. Such flexibility is widely expected given that the fundamental niche (Hutchinson 1957) of most species is likely to be much wider than the realized niche that will be measured empirically: where competition for prey items is relaxed or removed, “novel” resource species will be exploited.For example, zooplankton alter patterns of resource intake depending on the abundance and variety of prey (Gentleman et al. 2003); food selection by an omnivorous thrip (Frankliniella occidentalis) varies depending on host-plant quality and prey availability (Agrawal et al. 1999); and Chaoborus larvae show reduced prey selectivity when prey abundance is low and larvae are hungry (Pastorok 1980).

Thus, the high abundance of a common prey may mask the ability of predators to consume other, less abundant prey which will become a viable source of nutrition if typical prey resources are depleted or lost (Pimm 1991).Motivated by such examples of species’ ability to alter their feeding patterns in response to the abundance of actual and potential prey species, we explore the consequences of incorporating predator-prey “rewiring” (predators switching to food items not previously consumed) into simulation-based analyses of structural food-web robustness. We extend static models of food webs by introducing trophic interactions that can respond to the loss of species from an ecosystem—structural dynamics—and quantify the resulting robustness to secondary extinctions.Our results allow the identification of a new category of species, which we call “overlap species”, which promote robustness as shown by comparing simulations incorporating structural dynamics to those with static topologies. Following removal of a competing predator in our model, overlap species indicate other predators that can establish novel trophic interactions (i.e., “rewire”) to the removed predator’s former prey. Our results suggest the importance of compensatory mechanisms— and particular species—that may enhance food web robustness in the face of environmental change.

We analysed 12 of the best-characterized food webs available, some of which have been previously studied for their robustness to simulated primary species loss. The focal food webs represent a wide range of species numbers, linkage densities, taxa, habitat types, and methodologies (Table 2.1; Dunne et al. 2002; references in Allesina & Pascual 2009). We studied trophic species versions of the 12 food webs. The use of trophic species (hereafter referred to as species), that is, groups of taxa that share the same set of predators and prey (Briand & Cohen 1984), is a widely accepted convention in structural food-web studies that reduces methodological biases related to uneven resolution of taxa within and among food webs (Williams & Martinez 2000).For each food web, we simulated species loss by sequentially removing either (1) randomly chosen species; (2) the least connected species preferentially; or (3) species at high trophic level preferentially; for each criterion, 1000 deletion sequences were simulated for each food web.

For criterion (2), removal of the least connected species, total trophic connections (“degree”) was calculated for each species for both predator and prey links; the probability of a species, i, being chosen for removal was 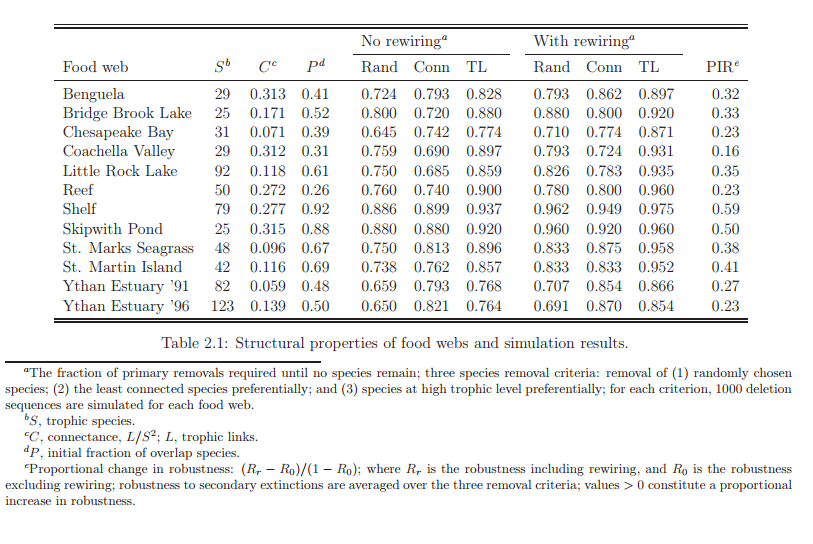